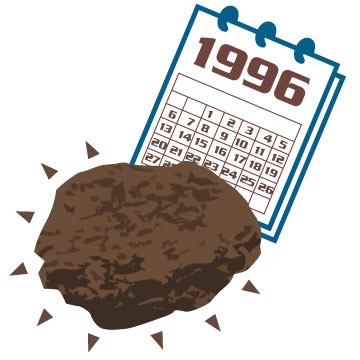 I’ve created this page to keep up with things that happen re: the 1996 McDonald’s hamburger – if you scroll down to the every bottom you can see the latest happening.

At my blog Best of Mother Earth we talk about the value of nutritional supplementation, the alternative food market, green advocacy and a bit of whatever else comes along.

The story of the 1996 McDonalds burger is simply this:

I posted a picture  a few years ago of a McDonald’s Hamburger that I had bought in 1996.

It looked just like the day I bought it.

What does that mean?

That means the post went absolutely wild on the interweb!!

Somehow thanks to the power of the interweb the 1996 McDonald’s Hamburger  continues to have a  perpetual life of it’s own.

Are you curious what the heck the story of burger is all about?

After that post blew out my bandwidth,  I wrote an FAQ

Folks seemed to have ALOT of questions.

Folks also had strong opinions – much of which was negative and pro-burger.

It reached a point where I let the comments speak for themselves.

May 2010 — Molly Windman of ROCKET BOOM mentions The Burger and Karen Hanrahan!  Thanks John for the share!

Got this sweet email From hopeful students in Denmark, Martin, Mathias and Nanna — Hey Karen. We are from a school in Denmark who has heard about your experiment back in 2008 with a Mc.donals Burger. Now we are making our own paper and we want to ask you if we can use your picture of the Burger? We think it is a very good experiment and we want to show it in our paper.  Hope you will answer us.

In July 2010 – A Canadian Mom and Jewelry Artist wrote:

We showed your post to my son when he was in grade 2 (2 years ago) and the teacher told us on interview day that my son had become a NO McDONALDS advocate! Apparently he went and told all the kids about this disgusting hamburger and why you shouldn’t eat McDonalds. He will not eat it unless we HAVE to (on the way home, starving and nowhere else to go). We have had it three times since then. I always regret it immediately after.I am so glad I decided to look this up again to reaffirm what I believe. Thank you!!

August 30th – The Toronto Star shares the same story of Sally Davies taking a daily image of a McDonalds Burger in the article my burger is also referenced!

From the above mentions – 9186 HITs on the burger post!

September 16th 2010 – Friends Eat – A foodie community quotes and links to the burger in a fantastic article about fast food wondering does it decay. The Spence Cooper article includes a fab video of a guy who’s been saving burgers since 1989!!

( love that noone believed his story either! )

September 17th – the above article appears in vigilant citizen

I hope you are well. I am writing to you from the show World News with Diane Sawyer. I am writing in regards to your fascinating photo of the two McDonald’s hamburgers and their lack of mold.

We wanted to show your photo on our show tonight in an item we are doing relating to how McDonalds produces these scary food products. May we have permission to air your photo?

Any help would be greatly appreciated.

Traffic completely blows out my site!

I guess if I were to comment on that I’d say:

foods “designed” to be addictive add to the obesity epidemic. It’s the greed of those making and designing food that is an issue.

Oct 25th Dr. Mercola adds the image of the 14 yr old burger in an educative article of interest at his website.

Oct 28th – I get an email  that says — Am US correspondent for SPIEGEL TV, a German tv program and doing a story about the burgers that won’t die. Am interested in yours and in speaking with you. Thank you! Karin

Oct 29th – We did a phone Interview – re: burger that will not die

Spiegel TV Filming for Interview in my home re: the burger.

November 5th – Revisiting the Myth of the 12 Year Old Burger.

We run a new (non-profit) online magazine on animal rights that makes a lot of parallels between other movements and general concerns, from environment and sustainability to civil rights.

We’re publishing a small article about Sally Davies’ Happy Meal Project and I found your blog where you show impressive images of a much older hamburger. I would like to know if this burger still exists, and if so, if you wouldn’t mind sharing those images with us so we can publish them alongside Sally’s photographs. (even if it doesn’t exist anymore, those photos still create an impact and we’d like to publish a note about it).

This will be for issue nr2.

Issue nr1 can be found here: http://issuu.com/paralelo/docs/paralelon1 (there’s no english version unfortunately, our magazine is in portuguese).

On behalf of the editorial team of //PARALELO//

May 18th – News journal Ekstrabladet writes about the burger.

June 21, 2011  Article – German online news Spiegel – never did see the film from the shoot Speigel TV did in my home this past fall. Oh well.

Brilliant commentary from  Annie of PHD In Parenting

Oct 15, 2011 – Karen Hanrahan and the burger find themselves on the syllabus of Cool Culture Soul Machine: The Anthropology of Everyday Life

the mcrib, they say it’s a sandwich with quirky sense of humor – but what’s in it?

Mcgreen, is it greenwashing? European McDonald’s serves it up organic.  Perhaps it’s fair to support corporations that shift their business model, I find myself wondering why it’s only part of what they do vs the whole.  ( thanks Mary Hunt for bringing this to my attention)

December 18th, 2011   friend is eating breakfast – reading her paper –> she says — wow – there’s Karen and that burger again – in of all places The Chicago Sun-Times. “People in Illinois and the fun things they do!”

I couldn’t find it online 😦

January 11th  a producer for Jonathon Brandmeier/ WGN Radio in Chicago contacted me – she said:   I read about the burger you’ve kept for 14 years on “Ripley’s Believe It or Not!” – amazing! Johnny would love to talk to you about that and also about your work as a wellness consultant. We’re a morning show, on the air M-F from  6-9 AM….if you’re usually available in the mornings, let me know if you’re interested and we can set-up a time to chat.

Jan 2012 sometimes the burger post will get a ton of referring hits from another blog, this one while written in 2010 is in russian!!

Feb 2012 – Best of Mother Earth and the burger friend a local childhood obesity campaign and project.

• Stop by to say happy birthday to her sandwich: If looking for something a bit different this weekend, here’s one idea:

On display Sunday from noon to 2 in the Old Main Room at ISU’s Bone Student Center- a 16-year-old hamburger.

Purchased back in 1996 at a fast-food restaurant by Karen Hanrahan, the local healthy-diet guru, and stored in a drawer of her home, unrefrigerated, in its original container, the burger is said to now be crumbling a little and has an “odd smell,” but – thanks to the chemicals and preservatives injected into fast-food today – looks almost exactly like it did 16 years ago.

Will there be petrified fries with that? 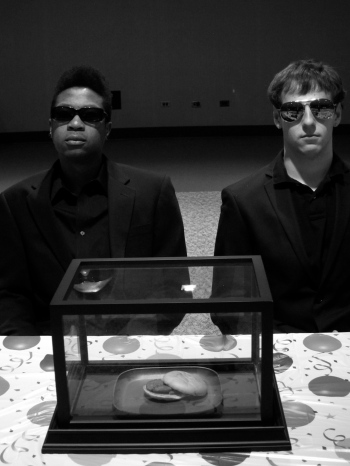 the infographic below is sourced from here.  the post,  written by Beth Buczynski asks which of these shocking statistics is new to you?

The detail about fountain drink dispenser and fecal matter seriously grossed me out.

Two Sides To The Story ?  Beef Is Beef  What do you think?

Jan 2012 — Best of Mother Earth is interviewed by Jonathon Brandmeier on Chicago’s WGN! The interview is really funny!

2 Responses to The Burger